Get Fat Adapted for weight loss and sport performance.

Weight loss is one of the most challenging topics because we live in an obesogenic environment with unhealthy and as much as I regret to say this, often tasty foods around us! No wonder everyone wants a quick fix because to lose weight takes long-term discipline and quite frankly it can be extremely hard. What works for one person may not work for someone else. This is why I want to discuss fat adaptation; it may be a good option for one person and not for another, and I’ll explain why. I’ll also share my own experience in becoming fat adapted.

Likewise, I’ll discuss why becoming fat adapted may be a useful tool in sport and I’ll also explain the challenges that come with it.

Disclaimer: I do not recommend ketogenic diets for the general population but aim to discuss why it is being considered as a weight loss option and a sports performance tool. If you have a medical condition, e.g. diabetes I do not recommend starting this diet without consult from your GP and dietitian/experienced nutritionist.

What is fat adaptation?

Becoming Fat adaptated involves eating a high fat, low carbohydrate (carb) diet in order for your body to use a greater amount of fat as fuel. Once your carb stores (glycogen in liver and muscle) are low your body then starts to produce ketones in a process called ketosis. Ketones, mainly beta hydroxybutyrate are produced from fatty acids and can supply our brain, organs and muscle with fuel so we don’t need to rely exclusively on glucose anymore as the main fuel source. So basically you re-train your body to use fat as the key fuel source. Fat adaptation can occur within a few days if you go with a very low amount of carbs (25-30 g per day [a small scoop of mash potato is around 10g] or you may opt for a longer time frame in which you allow yourself more carbs (less than 50 g per day).1 Once you are fat-adapted you can then experiment with adding in some extra carbs in order to develop your own tolerance level. There will be some trial and error and the longer you follow a higher fat lower carb diet the greater your ability to dip in and out of ketosis without it affecting your fat burning rate.

So what does this mean to me?

Becoming fat-adapted means you can burn fat at a greater rate, which can be great for weight loss! You do not necessarily need to reduce calorie intake and it also helps to stabilise blood sugars with no dramatic increase in insulin and blood glucose. (I discussed insulin resistance in my last blog).

There is generally a greater feeling of satiety with high fat foods.

If followed appropriately, a higher fat lower carb diet can supply your body with large amounts of vitamins, minerals and phytonutrients (substances in plant foods that have an extensive list of health benefits!). This way of eating also produces less free radicals than a high carb diet.1-3 People who are always trying to lose weight with low calories diets followed by intermittent weight gain when they indulge on unhealthy treats are often lacking important vitamins and minerals. However, you can also follow this diet in an unhealthy way with large amounts of processed meats and fats, which is not good for you in the long-term. This is a really important point to note-not all high fat low carb diets are the same!

Sports athletes can benefit as they become metabolically flexible i.e. they can burn fat at a greater rate during exercise.1 This avoids ‘hitting the wall’ which often happens in endurance events such as marathons, triathlons and iron man. This is because we only have a limited amount of glycogen and without adequately timed re-fuelling during the event you end up crashing! If you are fat adapted there can be an added advantage of having some carbs just before or during an event/competition. You can then use this sugar at times when it is really needed (high intense spurts).1

Being able to burn fat at a greater rate means that when your carb stores are used up there is less of a tendency to breakdown muscle (protein) as a way of supplying glucose.1

I was sceptical about this aspect as it takes a longer amount of time to burn fat than it does to burn glucose (fat has to be mobilised from fat stores and then travel in the bloodstream to muscles) so my first reaction to this was well would this not slow you down if you are relying on fat as the predominant fuel?! What has been observed is that once you are fat adapted your body works as a carb sparing tool when needed; at low intensity training you burn a greater amount of fat than if you were non-fat adapted, but once a sprint is on you use your carb stores for instant energy. So for example, at a comfortable running pace you can burn a greater amount of fat to carb but let’s say you run up a hill, sprint to the end of a race, or go on a run in soccer/rugby you can then rely on your carb stores!1-3 So overall this means you avoid running low on carb. There is still a place for adding in extra carbs before a race or during a race to top up your blood glucose, but this needs to be tailored to what suits your body. Also you need to be well fat adapted before you consider this as a performance tool.1 There still needs to be more research into this and again it’s a matter of trying it out and if you feel good after a few weeks and are beating your PB then keep going with it and if you are going the other way then maybe this way of eating is just not for you!

A recent 2015 studied found that fat-adapted endurance athletes were just as good at replenishing their carb stores than athletes who were not fat adapted and ate a lot of carbs.2

Exercise creates inflammation. This is normal and it is important for muscle growth. But if your body is constantly in an inflammatory state it can cause fatique and ultimately affect performance.1 A higher fat diet, especially one high in omega 3 can help to minimise inflammation (see my last blog on fat).

The other potential advantage of fat adaptation to an athlete is that you avoid consuming large amounts of low nutrient refined carbs that is required to carb load. Up to 2 days prior to an event it is often recommended to carb load by eating low fiber foods such as white bread with jams, processed cereals and sugary drinks in order to achieve 8-10g of carbs per kg of body weight ( e.g. 560-700g per day for a 70kg individual). This is fine once in a while but when carried out on a regular basis it can lead to sub-optimal vitamin and mineral intake along with a lot of gastrointestinal discomfort such as gas and bloating.

Other possible benefits include a greater pain threshold, faster recovery and greater immunity.1

Are there any side effects?

There can be side effects during the initial period known as the “keto-flu” or CHO withdrawal symptoms.1 These can range from light headedness to cramps, diarrhea or in extreme cases increased heartbeat. There is good research out there on fat adaptation in sports athletes but there needs to be more studies that show more conclusive and reproducible evidence on the long-term effects of fat-adaptation. If we start to follow a really high fat diet there may be negative consequences to our health in 20 plus years that we hadn’t even considered; just like what we are seeing now with over-consumption of carbs. Fat adaptation is a relatively new approach and it needs to be individualised, what works for one person may be quiet different to what works for someone else.

A few months ago I underwent a 20 day fat-adapted (ketogenic) diet as part of research undergoing at Auckland University of Technology. I volunteered for this study as I wanted to see if I would find it difficult to follow and if I would experience any beneficial or negative effects.

Over the last few years I’ve realised that my body feels better when I eat only small amounts of complex carbs (like bread, cereals, rice, and potatoes). I try to have a portion of these either at lunch or dinner. When I eat these at every meal I tend to gain weight even though I’m still only eating the recommended servings (6+ servings; 1 serving being a slice of bread or 1 cup of cooked rice/pasta).

So for the next 20 days I followed a high fat low carb diet. At each meal I aimed to eat around 20 grams of fat and less than 10 grams of carbs. Below is an example of what I ate in one day (Table 1). I also had 2 tablespoons of oil with each meal as part of the study.

I have to admit, it did feel strange freely pouring oil onto the pan or a salad. My dietetic instinct came in “what about the calories!!” Each morning I measured my blood glucose and ketone levels. We normally produce ketones after an overnight fast but to get into full ketosis you need to have a ketone level of greater than 0.5 mmol/l, but usually a reading between 1-3 mmol/l works best.1 As you can see from table 2 it took nearly 6 days to get into full ketosis! The first few days were fine but on day three I had a football match and I felt really tired and slower than normal. It’s interesting as at this point my glycogen stores were nearly all used up but I wasn’t fully in ketosis, so no wonder I felt tired! From then on things were good up until day 9 when I had a craving for a chocolate brownie (it was really good too!!). The reason for this craving may be because my blood sugar was only 3.7 mmol/l the day before, and I think this could be down to a lower total calorie intake than normal. The next day I went on a wine tasting tour and as expected I came out of ketosis (ketone level was 0.3 mmol/l). What I found really interesting was that my blood sugar went up a lot after I had some extra CHO post drinking (5.4 and 5.8 mmol/l). I often feel tired for a few days after drinking alcohol and I can now relate this to a physiological response in my body; increased blood sugars!

My overall view of fat-adaptation 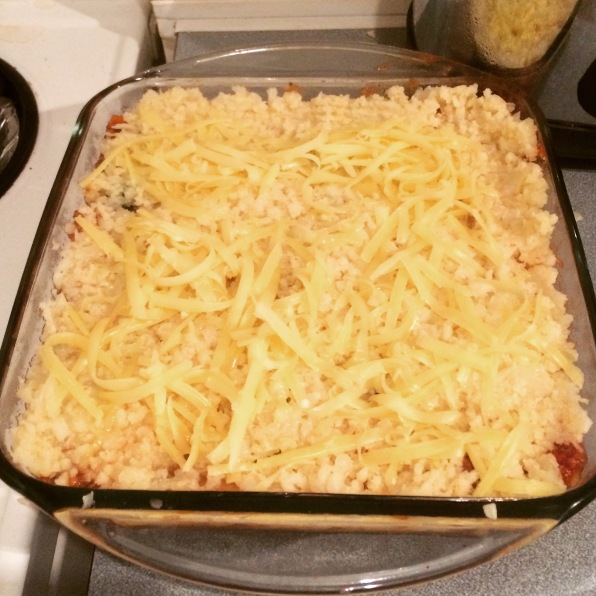 Tomato based Shepherd’s pie (cauliflower mash) ready for the oven!